Diva Dogs and Funky Felines - For the Urban Pet Owner

Diva Dogs and Funky Felines is a guide for city-dwelling pet owners who want to maximize the time and space they share with their dog, cat or other animal companion. Whether you live in a cramped basement apartment with an iguana or share a house in the trendy part of town with a black Lab (or two), we'll help you improve quality of life for your pet with tips, product guides and expert interviews. 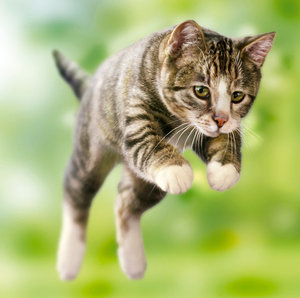 Watch out, Westminster Dog Show, Cat Agility Tournaments have come to town. International Cat Agility Tournaments (ICAT for short) were modeled after dog agility shows, which imitated equestrian shows. Both dog and cat agility shows have gained popularity among dedicated animal aficionados, but most causal pet owners aren’t familiar with these mini-athletic contests. That is, until last Sunday when the New York Times ran an article on feline agility competitions.

The mere concept of placing a feline in an agility competition may leave many cat owners scratching their heads. It’s not that cats are incapable of jumping through hoops or running through tunnels. Cats can perform incredible gymnastic feats – like jumping from a ledge and flying seven feet onto a bed containing their sleeping owner. (This actually happened to me.)  The problem, as the Times article points out, is getting them to do it on command.

ICAT’s official website recommends that owners serious about entering pets in agility competitions start training their feline at about five weeks. The key to training cats is a bit different than training dogs. Cats are moody and finicky (ya think?), so making the training-and subsequent contests- fun for them is important. Coaches entice a kitty to jump and run on ramps and through hoops by enticing them with feathered toys or wands. Every cat has a toy that makes them run like a sprinting champ. It may just be a matter of choosing the right toy to spur a potential kitty champ through the obstacle course.

The basic ICAT obstacle course consists of stairs, hurdles, hoops and poles for a cat to zigzag through, although organizers hope to include other obstacle in the future. Winners of cat agility tournaments are usually rewarded with ribbons or other mementos, although cash prizes are sometimes offered.

Cat agility training benefits even non-competitive cats. It’s a great way to make housebound cats get some exercise and keep things exciting. Dog owners take their pets out for walks everyday, so at least indoor dogs can see the sights and stretch their legs a few times a day. Cats need a similar type of activity at least once a day, according to veterinarians. So even if you have no desire to enter your cat in an official agility competition, you can play with him and encourage new athletic endeavors to keep him in shape.

This article originally appeared on Yeepet.com
Posted by JadeB at 6:06 PM